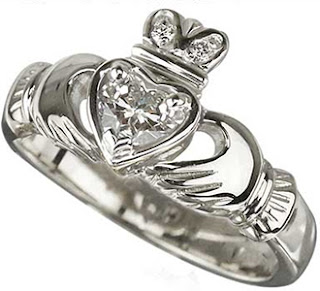 The Claddagh ring and its fabled history can be traced to 16th century Ireland so along the way varying folklore and rituals have developed.

A Claddagh ring is such a sentimental piece of jewelry that many considerations have evolved over time that have been forged by unique family traditions and experiences.

Over the years we have heard several Irish family traditions from our customers that relate to the Claddagh ring; one of these traditions include that a Claddagh ring may only be worn as a wedding ring. Even though it is often called the Irish wedding ring there is not a requirement that this special Irish ring must only be worn as a wedding band as it is also widely utilized as an engagement ring.  Additionally, the rituals of the Galway Folklore explain that a Claddagh ring may be worn to indicate that you are in an unengaged relationship or even that your heart is free.

The gift of a Claddagh ring may be shared between anyone who is dear to you; this may include lovers, friends and of course family members.  Additionally, while some subscribe to the notion that a Claddagh ring may only be worn by a female, we must report that there are many available men's Claddagh rings.

Another opinion, though less common, is that a Claddagh ring must be received as a gift and never purchased for oneself.  While the receipt of a gift is always appreciated, you may buy one for yourself if you are so inclined.

Most legends of the Claddagh ring stipulate that the original design was crafted from gold, so it is easy to understand how some may mandate that only gold is the acceptable metal.  However, gold is not a requirement of an genuine Claddagh as the ring is readily available in silver and many other precious and non-precious metals.

An area of typical agreement is that Claddagh rings should be made in Ireland, as is the case with all our selections at The Irish Gift House, but in our global economy that is not always the case.  Irish made jewelry is unique in that by law all precious metal is hall marked by the Irish Assay Office at Dublin Castle, so you can be guaranteed that your Irish jewelry is truly made in Ireland.  Just look for the hall mark stamped on the inside of your Claddagh ring If you have any doubts.

Not surprisingly there are many different versions of the Claddagh legend; so who is to know which version is correct?  The Claddagh history that we use at The Irish Gift House is the same version that was supplied to us by O'Connor Jewelry.  O'Connor Jewelry was the Irish jeweler that in the late 1940's opened the Claddagh ring market in the United States, so we figure they knew what they were talking about.  We would ask our original Irish jeweler how they came to use their particular version of Claddagh history, but sadly both Thomas O'Connor and his son James have both passed on and the company has been defunct for many years.

Claddagh Ring History - Early 16th century legend tells that a fishing boat, from the village of Claddagh in County Galway, Ireland, was captured by pirates and the crew taken as slaves. One of the crew-members, Richard Joyce, was to have been married the same week he was captured. His bride-to-be was inconsolable.

After eight years, Richard escaped and returned to his native village of Claddagh. He found, to his great joy, that the girl he could not forget had not forgotten him and she had never married. He gave to her the special ring he had crafted. They married soon afterwards, never to be separated again.
Posted by The Irish Gift House at 12:16 AM 1 comment:

Inis Body Lotion is Now Available in a Pump Bottle at The Irish Gift House! 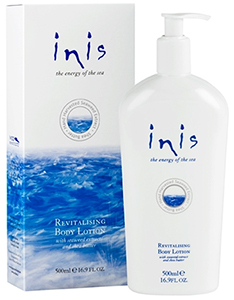 TheIrish Gift House.  This revitalizing and nourishing body lotion from The Fragrances of Ireland had been only available in a 200ml tube, but due to strong demand for a larger size container Inis body lotion is now available in a 500ml (16.9 ounce) pump bottle.

Inis body lotion is unique in that it combines naturally harvested seaweed extracts along with shea butter.  Shea butter is an extract from the African shea tree, and while the butter is eatable, it is mostly used as a moisturizer.  Additional ingredients in this Irish body moisturizer include vitamins and minerals that can nourish your skin and you will be left scented with the cool and seductive fragrance of Inis the Energy of the Sea.

Inis body lotion is perfect for a daily regimen of skin care and is best used immediately after your shower or bath; it is also excellent for use after being in the sun.


Like all the products from The Fragrances of Ireland, Inis body lotion is made in Ireland and is never tested on animals.