Caisleán Bhun Raithe is Irish for Castle at the Mouth of the Ratty; at this location in County Clare, Ireland you will find Bunratty Castle. The idyllic Irish castle is set in the center of Bunratty Village, adjacent to the Bunratty Folk Part. 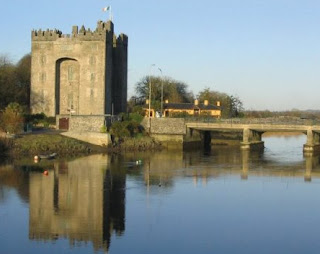 The castle is a five floor tall tower house; the large building is constructed from locally source grey stone. Bunratty Castle is the most authentically restored and complete medieval fortification in Ireland and it is complete with a collection of over 450 genuine artifacts that include medieval furniture and tapestries along with works of art.

This popular tourist attraction is operated by Shannon Heritage and boasts over 350,000 visitors per year.

Several years ago, I, along with my group, was one of those visitors. We really enjoyed the unforgettable medieval banquet eaten without utensils except for the ‘dagger’ to spear the delicious potatoes and vegetables along with delectable ribs and chicken. Customary of the period, you may also use your fingers to eat. The delightful soup was pureed and served in a wooden bowl that was consumed by drinking directly from the bowl.

For libation we enjoyed limitless pitchers of red and white wine, along with honey mead.
I asked our server, "Where in Ireland is the wine produced?" She smiled as she replied, "California. Ireland is the land of Jameson and Guinness, not wine."

The food was served by a cast dressed in the period costume of the 15th century with the servers providing entertainment as you partake of the authentic and enjoyable Irish feast. It was a truly enchanting evening from the moment we arrived.

These enjoyable medieval banquets have been an almost nightly event since 1963, but they do not represent Bunratty Castle's turbulent past which included civil war, occupation and bloodshed along with the building's destruction, three times over.

The present structure was vacated when the roof of the great hall collapsed in the latter part of the 19th century. The castle fell into great despair until it was purchased in 1954 by Viscount Lord Gort, who, with the help of the Irish Tourist Board and Government, restored the stone stronghold. In 1960 Bunratty Castle was opened to the public as a national monument.

It was a special treat for this writer to be in County Clare where my grandmother, Mary Hocking, was born and who, at the tender age of 17, departed for America. 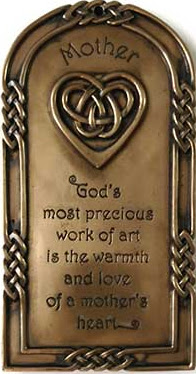 The Irish have long been known for their eloquence and mirth which many would simply call blarney. They are also associated with the love of family, and with that in mind, The Irish Gift House offers this collection of Irish blessings for mother along with some Irish witticisms for Mother's Day.


Gods most precious work of art is the warmth and love of a mothers heart.

A Mother’s LetterDear Son,
Just a few lines to let you know that I am still alive. I am writing this slowly because I know that you can’t read fast. Your won’t know the house when you come home we’ve moved. About your father, he has got a lovely new job. He has 500 men under him, he cuts grass at the cemetery. Your sister Mary had a baby this morning I haven’t found out yet whether it’s a boy or a girl so I don’t know if you’re an aunt or an uncle. I went to the doctors on Thursday and your father came with me. The doctor put a small tube in my mouth and told me not to talk for 10 minutes. Your father offered to buy it from him. Your Uncle Patrick drowned last week in a vat of Irish whiskey at the Dublin brewery. Some of his workmates tried to save him but he fought them off bravely. They cremated him and it took 3 days to put the fire out. It only rained twice this week, first for 3 days then for 4 days. We had a letter from the undertaker. He said if the last payment on your grandmother’s plot wasn’t paid in 7 days, up she comes.
Your loving mother.
P.S. I was going to send you 5 pounds but I have already sealed the envelope. 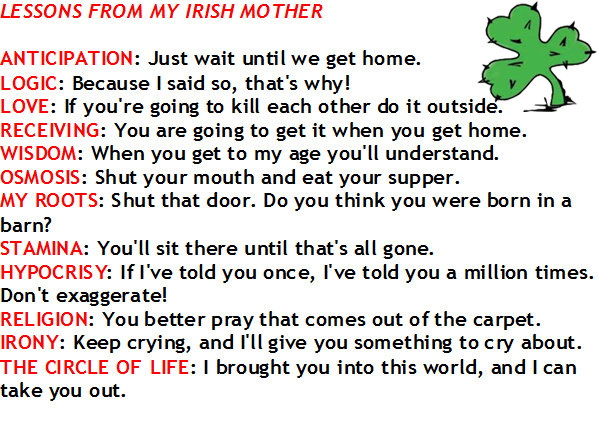 For two solid hours, Mrs. Casey told the man sitting next to her on the plane about her grandchildren. She had even produced a plastic-foldout photo album of all twelve of the children. Mrs. Casey finally realized that she had dominated the entire conversation with her grandchildren."Oh, I've done all the talking, and I'm so sorry. I know you certainly must have something to say. Please tell me, what do you think of my grandchildren?"


For Mother's Day, Murphy decided to splurge and took his wife and their four young sons to an upscale restaurant. Murphy ordered a bottle of wine which the waiter brought it over and began the ritual uncorking, and poured a small amount for mom Murphy to taste. Paddy, their six-year-old, exclaimed to the waiter, "Mister, you better fill up that glass, mom drinks a lot more than that."
Mrs. O’Malley said, "I'm always worrying about the safety of my children...especially the little dear who's rolling her eyes and answering me back right now!”

The Irish Gift House wishes all mothers a happy Mother's Day. Please visit our site if you are looking for a vast collection of free Irish jokes or Irish blessings for any occasion.

Posted by The Irish Gift House at 12:53 PM No comments: