Solvar Jewelry has just released their newest necklace adapted from a mystical Irish legend; the ﻿﻿ second in this series is the Salmon of Knowledge Necklace that is tailored from the folklore of Finn McCool.  In addition to the majestic salmon the sterling silver pendant boasts gold plated Trinity knots and can be found on the Celtic necklaces page on our site, www.theirishgifthouse.com.   Like last year's introduction, the Children of Lir necklace, the Salmon of Knowledge pendant is part of the Fáilte collection.
The Salmon of Knowledge Irish legend is about Fionn Mac Cumhail, (pronounced Finn McCool in English), and how he inadvertently came to acquire the knowledge of the great fish and then become the leader of the ancient Fianna tribe.
The Irish story takes place in the Boyne Valley where McCool meets an aged poet who spent his days fishing the Boyne river.  The poet, whose name is also Fionn, (Fionn or Finn translates to fair in English) happens to know the prophecy of the enchanted salmon and that the first person to taste the fish would be granted all the knowledge in the world.  The poet and McCool become friends, but the poet never shares the prophecy with his young apprentice as he wishes to obtain the power of the salmon for himself.


McCool was an honorable lad and did as he was instructed, but while cooking a blister formed on the salmons skin that McCool impulsively busted with his right thumb.  In the process McCool burned the tip of his thumb and to ease the pain placed this thumb in his mouth, thus becoming the first person to taste the salmon of knowledge.
The old poet was angry when he found out that McCool has tasted the salmon as his one chance at infinite knowledge had disappeared while he was asleep.  The poet later told McCool about his newly acquired gift.  Finn McCool grew in strength of character, knowledge and acquired advanced skills in the arts and military command; he then become the leader of the ancient Fianna tribe. 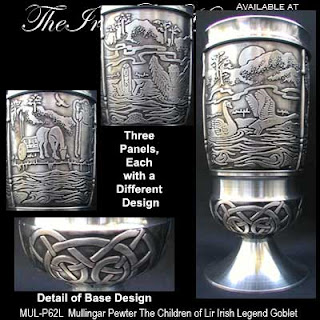 Visit our site or give us a call at The Irish Gift House so that we may assist you with finding the perfect Irish gifts or Celtic jewelry for any occasion; from Irish wedding gifts to Irish Christmas ornaments and decorations, we have it all.
Posted by The Irish Gift House at 6:50 AM