Irish immigration to the United States during the 19th Century is counted in the millions; with a huge concentration arriving during the Great Irish Famine of 1845 through 1852. In Ireland they were starving to death, but in the United States, along with other unskilled immigrant laborers, the Irish were working to death.

There was no shortage of work in our young country for the Irish immigrant and their progeny. Railroad and canals along with growing skylines were being built a rapid pace, and the mills factories and mines also ran on cheap and easily replaced labor.

The laborers toiled long hours, often 12 hours per day and seven days a week, just to earn the most basic living. The work was performed in often dangerous and unsanitary conditions. These conditions, along with child labor and low wages, contributed to the organization of labor unions. Many of the early leaders where Irish immigrants along with their adult children.

The industrialists of the day when to great length to halt the organization of the workers. Violence and death was a common practice as was the case of the Pullman Strike of 1894 that resulted in the deaths of 30 strikers. The strike was crushed and the demands were not meet, but industry was definitely on notice. Additionally, six days after the strike ended, congress, in an effort to appease organized labor, designated Labor Day as a federal holiday, a concept that was initiated by two men whose parents were Irish immigrants.

It is known that Peter McGuire, proposed a workingman's holiday during a meeting of the United Brotherhood of Carpenters and Joiners. McGuire was the organization's general secretary at the time and he later went on to be a co-founder of the American Federation of Labor (AFL). 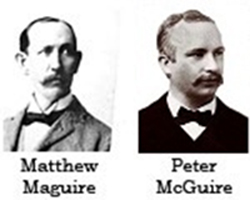 A case is also made claiming that it was Matthew Maguire, a machinist and union leader, who proposed a Labor Day holiday to the Central Labor Union in New Jersey. Maguire went on to be selected as the 1896  nominee for vice president for the Socialist Labor Party of America.


Samuel Gompers, who co-founded the AFL along with Peter McGuire, credits his partner as the father of Labor Day. It is widely speculated that Gompers did not want the credit to go to Matthew Maguire, who was an avowed socialist, because many in organized labor wanted to distance the movement from socialism.