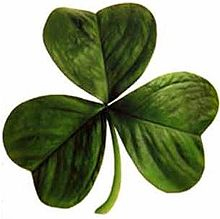 What do you know about the shamrock? From the Druids to St. Patrick and British oppression the shamrock is part of Irish history.

During the Iron Age in Ireland, from 500 BC to 400 AD, the ancient Druids believed that the number 3 held mystical powers. This is evident in the stone carvings found at Newgrange in Co. Meath, along with numerous occurrences found in Celtic knot-work, such as the commonly named Trinity knot. The Druids considered the three leaves of the shamrock plant, which blankets the ground in Ireland, to be a natural sign of their scared number 3.

The Druids also believed that the shamrock held medicinal attributes along with mystical powers. One belief is that shamrock, by pointing its leaves upward, could foretell a change in the weather. Then, as it is now, the shamrock was considered lucky; however the Druids believed that it could keep you from harm by warding off evil spirits.

The word shamrock derives from seamair óg that translates to young clover in the Gaelic language and St. Patrick is credited to adding to the popularity of this Irish icon during the 5th century.

St. Patrick, who spent his early life as a slave in Ireland, followed God's command, that he had received in a dream, to escape and return to his home and family in Britain. St. Patrick, who had become very spiritual during his captivity, entered a monastery and became a Catholic Priest. 30 years later, St. Patrick, who by this time had become a bishop, felt the calling to return to Ireland as a missionary to the pagan Irish.

According to legend it was during this time that St. Patrick used the symbolism of the 3 leaf shamrock to explain the concept of the Holy Trinity; the Divinity of God the Father, God the Son and God the Holy Spirit are like the 3 leaves of the shamrock, three in one.

March 17th, the day of St. Patrick's death, is celebrated as both a religious holiday and as a celebratory event. In tribute to Ireland's patron saint a shamrock is traditionally worn on this day and many participate in the custom of drowning the shamrock by placing the shamrock in the last glass of whiskey or beer of the night and then when the drink is finished the shamrock would be plucked out of the glass and tossed over the left shoulder for luck.

The British infamously receive credit for endearing the status of the shamrock because during the 19th century reign of Queen Victoria wearing the Irish icon was outlawed and even punishable by death. Naturally, the shamrock became a symbol of Irish rebellion and the wearin' of the green became a point of national pride.

Today the shamrock is Ireland's most recognizable symbol and Irish throughout the world wear them with glorious pride.

The Irish Gift House is proud to offer a collection of Irish made shamrock jewelry and we would be honored if you were to browse our assortment.