W B Yeats - Horseman Pass By 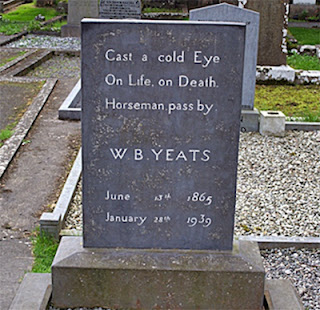 The final resting place for the Irish poet is Drumcliff Church in Co. Sligo, located on Ireland's Atlantic coast, with Ben Bulbin mountain in the background.

Under Ben Bulbin is the title of one of his poems from which the following verse is taken:

Under bare Ben Bulbin's head is Drumcliff churchyard Yeats is laid.
An ancestor was rector there
Long years ago, a church stands near,
By the road an ancient cross.
No marble, no conventional phrase;
On limestone quarried near the spot
By his command these words are cut:
"Cast a cold eye
On life on death
Horseman pass by".

William Butler Yeats, son of the painter John Butler Yeats, was born in Dublin in 1865. Considered Ireland's greatest poet, and also perhaps the best poet in the English language since Wordsworth, he began his career as "one of the last Romantic" to quote his own description.

Many of his early poems, both wistful and mysterious, are of haunting beauty. But in the early 1900's he began to direct his energy to the twin causes of the Irish literary renaissance and Irish national independence. A new style emerged in his writing, austere, but capable of sustained magnificence, dealing with a wide range of human experience including the momentous public events which occurred in Ireland during his lifetime.

He was a founder member and first president of the national Theatre Company, The Abbey, and also served as a member of the Irish Senate.

In 1923 he won the Noble prize for literature. He died in France in 1939 and was interred as he wished in Drumcliff churchyard in 1948. His gravestone bears the epitaph as he had directed.

Cast a cold eye
On life on death
Horseman pass by.

The Irish Gift House routinely posts about Irish customs and culture on our BlogSpot.

Posted by The Irish Gift House at 1:55 PM